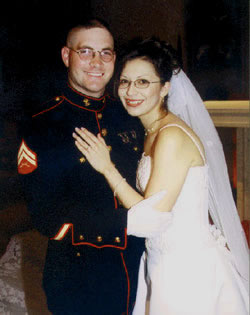 The year was 1989 and it was a bad time in 12-year-old Forrest Breeden's life. His parents had recently divorced, and he and his twin brother often fought with each other and got into trouble.

Forrest's mother thought the West Texas Boys Ranch could help Forrest and give her time to adjust to the divorce and continue her college education.

"Sending me to the Boys Ranch was the best thing that could happen to me and to my family," Forrest says today.

Forrest stayed at the West Texas Boys Ranch for five years, then returned home to live with his mother and siblings and graduate from high school.

During his stay at the Ranch, Forrest learned rudimentary welding skills from the farm and ranch manager and decided he wanted to pursue welding as a career.

"I am what I am today because of the Boys Ranch," Forrest says. "They taught me how to set goals in life. They helped my entire family cope with a difficult time. They helped me further my education. They will always be in my heart and in my family's heart."

Then, Forrest married Brenda Martinez-Chavez. There never was a doubt where to hold the reception.

"I told Brenda I always wanted to have the reception at the Ranch," Forrest says. The couple married at Sacred Heart Catholic Church.

Forrest's fondest memories of the Ranch are all the opportunities it offered him. "There was horseback riding, swimming and deer hunts. I never would have gotten the opportunity to experience those things if I had not gone to the Ranch. They also gave me the opportunity to learn discipline and self-respect." 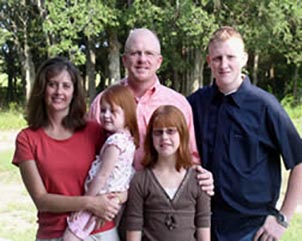 "Hear, my son, your father's instruction, and do not forsake your mother's teaching" - Proverbs 1:8

What is a young child to do if he loses his parents?

That is exactly what happened to Kirby Cope, an alumnus of West Texas Boys Ranch. This is Kirby's story in his own words:

If I remember correctly, it was November 1977, a few months after my father was buried and after seeing my mother struggle with the grief of his death.

Because of my age at the time (I was 8 years old, and there were 7 children at home), it is hard for me to remember exactly how I arrived at West Texas Boys Ranch. People from the Ranch offered to help my mother with the younger children. I remember being left that day at the Ranch, scared, but thoroughly accepted by the staff. Structure, discipline, consistency and love became a way of life for me. I'm thankful that God strategically placed people in my life trained to know and understand.

Living at the Ranch over the next ten years, my wishes were to have a home like other boys and girls had. There have been many trials and tribulations for me, but through the foundation so firmly planted beneath my feet and the caring people at the Ranch, I've overcome. I stand today wanting to give back.

Kirby, now married with children of his own, is the owner of two private businesses that he and his wife operate in east Texas. Kirby is living his dream, thank God, because people gave to provide for his care. Now, he is doing that for this generation of children at West Texas Boys Ranch by serving as a newly-elected member of the board of directors.

So what is a child to do when he cannot turn to his parents for guidence? Hope and pray that people will directly come to his aid. 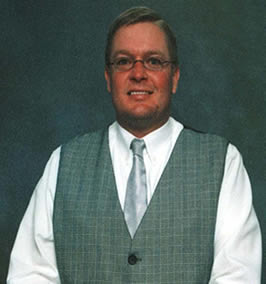 Scott Hull says his time at West Texas Boys Ranch "prepared me for just about anything life could throw at a guy. "Even now as an adult when I experience tough times," he continued, "I can think back to my teenage years at the Ranch and know that no matter how tough the times, I can make it. To say that the lessons I learned there helped change and shape my life would be a gross understatement."

Hull, now a realtor and mortgage officer in Fort Worth, lived on the Ranch about 2.5 years in 1986-88 after the unexpected death of his 39-year-old father Feb. 19, 1986. "At a very confusing time in my life, with a bleak path ahead," he said, "I really didn't know what my future held other than it didn't look good."

He added, "That's when the West Texas Boys Ranch stepped up and did what they do best - help struggling boys."

While living on the Ranch, Hull attended school in San Angelo, worked on the farm and ranch crew, competed on the rodeo team, participated in 4-H, fished and hunted deer, worked as a rodeo clown, and enjoyed camping "under the stars" with his horse's saddle for a pillow.

His 4-H project was "Oscar," a bull from the Ranch's registered Beefmaster herd. "I gave him the name Oscar when I was halter breaking him," Hull said. "I would tell him, 'You better hope this 4-H thing works out, buddy, because I'm the only thing between you and a pack of Oscar Meyer bologna.' "

"Anytime you get 50 boys on a working livestock ranch and surround them with good Christian men and women, good things are just bound to happen," Hull said. "Church and religion also played a big part of my youth. I was taught the lessons of the Bible and how they pertained to daily life."

After he left the Ranch, Hull graduated from Central High School in San Angelo and worked in construction in Big Spring and San Angelo until he began his real estate career with the aid of Steve Morris of San Angelo, former Chairman of the Board of Directors of West Texas Boys Ranch.

He says he's proud to be an alumnus of West Texas Boys Ranch. "It's hard to describe the Boy's Ranch to people who have never been there," he said. "It's something that needs to be seen in person to fully appreciate."

Thank you, Scott, for sharing your story. God Bless. 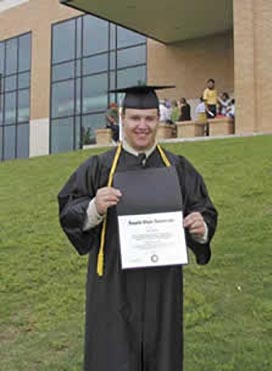 A Matter of Self Governance

Proud families always like to tell the neighbors about how the children are doing in school. The West Texas Boys Ranch family is no different. The Ranch is very proud of Char Carter - a young man who graduated from Angelo State University this May with a degree in Government.

Char came to the Ranch in 1999 at the age of 14. As is the case for most of the boys, it took Char a little while to adjust to life on a ranch, but he felt at ease-that is until the summer work program. "We drove posts, strung wire and eventually built a lot of fence! It taught me how to work hard."

The lesson in hard work must have taken root in Char's character, evidenced by his college career at ASU which he completed with a 3.75 grade point average! Char now plans to work in San Angelo while preparing to enter graduate school in 2008.

Will you help a child at West Texas Boys Ranch today?

Whether a child comes to us through the death or illness of a parent or, as is most often the case nowadays, due to neglect by parents because of the destruction of the family, West Texas Boys Ranch is here to help. 70 years after its founding, West Texas Boys Ranch still answers the calls of children in need by providing a Christian home environment for boys from all across Texas and beyond. We are able to do so because people like you still care. We do not receive federal or state funding - all of the needs for the care of our boys are met through people like you.

Make a difference in the life of a child today by making a tax-deductible contribution toward their support. When they grow to be healthy, caring, responsible parents, they'll thank you! 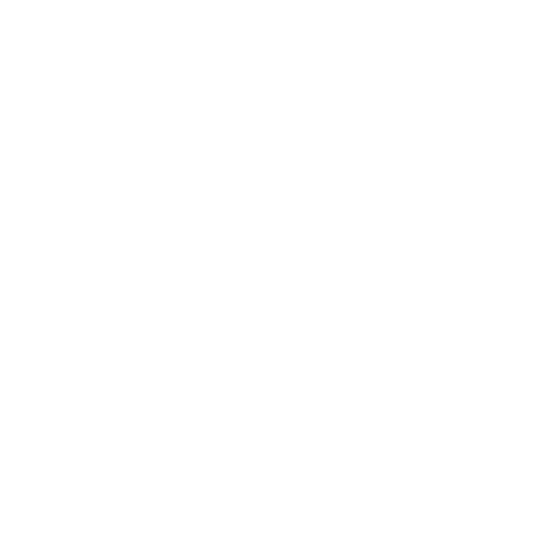